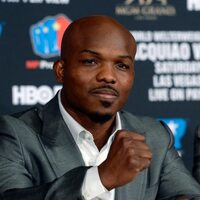 Timothy Bradley net worth and salary: Timothy Bradley is an American boxer who has a net worth of $10 million. Timothy Bradley's biggest pay day to date is the $6 million he earned fighting Manny Pacquiao on April 12th 2014. He could earn much more depending on pay-per-view sales. His previous biggest purse was $5 million that he earned also fighting Manny Pacquiao back in June 2012. Bradley shocked the world when he won that fight against Manny by a controversial decision. Bradley earned $4 million when he fought Manny again in April 2016. Originally from Indio California, Timothy Bradley was born August 29, 1983 and was trained by his father from a very early age. His nickname is "Desert Storm" which is a reference to the area in Southern California where he grew up. Timothy Bradley stands 5 foot 6 and has a 69 inch reach. His boxing record as of June 8th 2012 is 28 wins, 0 losses with 12 wins by knockout. When Bradley was asked what he plans on doing with his $5 million Pacquiao money he stated:

"I'm putting that money away, man. I aint buying nothing. I got everything I need. I'm not buying anything. Me and my wife, we're going to put that money away so I don't ever have to come back to this game. Once I leave it, I aint never got to come back ever again."