Sugar Ray Robinson Net Worth: Sugar Ray Robinson was an American professional boxer who had a net worth of $500,000 at the time of his death. During his career, Sugar Ray earned the equivalent of $30 million in today's money from boxing. Today, the original "Sugar Ray" is considered to be one of the best boxers the world has ever seen. After a legendary amateur career, he turned professional at the age of 19. Between 1943 and 1951, Sugar Ray enjoyed a 91-fight unbeaten streak – the third-longest in history.

For many years, Robinson held the world welterweight title, and he also won the middleweight title a number of times. He also became the first boxer in history to win the divisional world championship five times. Many historians have actually claimed that Sugar Ray was the best pound-for-pound boxer of all time, although he is generally ranked in the top five. He also became one of the all-time leaders for total knockouts. Outside of the ring, Robinson was known for his colorful persona.

After retirement, he attempted to pursue a career in the entertainment world, although it didn't go as planned. Towards the end of his life, Sugar Ray struggled with financial issues, which ultimately ended in his relatively low net worth at the time of his death – despite the enormous wealth he had accumulated during his boxing career.

Early Life: Walker Smith Jr. was born on May 3rd of 1921 in Ailey, Georgia. Raised alongside two siblings by a corn farmer, Smith Jr. eventually relocated with his family to Detroit. Once there, his father took a job as a construction worker and Walker began working as a cement mixer and a sewer worker. After his parents split up, Walker Jr. lived with his mother in Harlem, New York.

It was in Harlem that Walker began his journey as a boxer. After dropping out of high school in grade nine to pursue boxing, he borrowed his friend's birth certificate to enter a boxing tournament (despite being below 18). His friend's name was none other than Ray Robinson. When a female audience member commented loudly that "Ray Robinson" was "sweet as sugar," Walker's boxing nickname became "Sugar Ray" Robinson.

Although Robinson was intent on becoming a successful boxer, Harlem provided plenty of bad influences for the young lad. By his early teens, he had joined a street gang, and by the age of 16, he was married. During this period, Sugar Ray established a stunning record as an amateur boxer. Although his record was never actually confirmed, it is widely believed that he had won 85 matches with zero losses. According to the stories, 69 of those wins came from knockouts. By 1940, he had won the Golden Gloves featherweight championship and the lightweight championship.

Career: By 1940, Robinson had gone pro. He won early fights against legends like Jake LaMotta and Sammy Angott. By 1943, Robinson had joined the U.S. Army. He continued to box during his time in the military and was honorably discharged after falling down a flight of stairs and suffering amnesia. In 1946, he became the new welterweight champion when he beat Tommy Bell. In 1950, he donated his entire purse to cancer research after defending his welterweight title against Charley Fusari.

In 1947, he refused to fight Jimmy Doyle. Sugar Ray had a dream in which he killed Doyle in the ring, and he was afraid that it would come true. After consulting with a priest, Robinson agreed to take the fight. Sugar Ray's premonitions proved to be true, and Doyle was killed by a knockout blow from Sugar Ray. Ray later purchased a house for Doyle's mother.

Robinson later fought LaMotta again in a fight known as the "Valentine's Day Massacre." The fight was eventually recreated in Martin Scorsese's "Raging Bull," starring Robert DeNiro as LaMotta. In 1952, Robinson retired – only to return in 1955. Although the next few years went well, Robinson ultimately started to struggle by 1959. By 1965, he was being knocked out by boxers who were widely known for having zero knockout power. That year, he decided to retire.

Boxing Style: Sugar Ray Robinson was technically gifted and extremely versatile as a boxer. Known for implementing various different boxing styles within a single match, he made it extremely difficult for his opponents to predict his movements. In turn, he exposed, targeted, and took advantage of his opponents' weaknesses. His speed and precision were supplemented by what he called "instinct" and "rhythm," allowing him to strike fast without a moment's hesitation.

Relationships: In 1938, Robinson married Marjorie Joseph, although this marriage was annulled by the end of the year. Nevertheless, Joseph and Robinson had a son together in 1939. Not long afterward, Sugar Ray married Edna Mae Holly, a famous dancer who performed at the popular Cotton Club. They were married in 1944, and in 1949 they welcomed a child into the world. By 1962, the pair had divorced.

In the same year that he retired in 1965, Robinson married Millie Wiggins Bruce. The couple then lived together in Los Angeles. Controversy started to emerge when Ray's family members accused Millie of keeping Sugar Ray sedated and "drugged up" on various forms of medication. Ray's own son claimed that Millie was controlling his father. Other family members claimed that Millie kept them away from Sugar Ray towards the end of his life.

Financial Issues: Although Sugar Ray had become one of the most successful boxers of all time, he ultimately went bankrupt. In his autobiography, Robinson admitted that the entirety of his $4 million wealth was completely squandered as early as 1965. That year, he was given a large trophy for his contributions to boxing, although the trophy was too big to fit in his modest Manhattan apartment. His furniture was not strong enough to support the trophy. Two years later he had retired, and he was later diagnosed with diabetes.

Entertainment Career: Following his retirement from boxing in 1965, Sugar Ray attempted to reinvent himself as an entertainer. Early television roles came with shows like "Mission: Impossible" and "Land of the Giants." Ray also appeared in a few films, including "The Detective," "Candy," and "The Todd Killings."

Death: Sugar Ray Robinson struggled with Alzheimer's disease during his last years. This is a common issue among boxers, and the effect of head injuries and concussions has been well-documented by modern scientific researchers. On April 12th of 1989, Sugar Ray passed away at the age of 67. 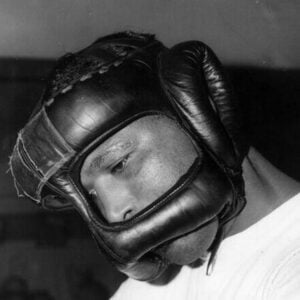