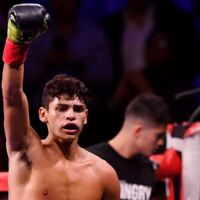 Ryan Garcia net worth: Ryan Garcia is an American professional boxer who has a net worth of $10 million. Ryan Garcia was born Victorville, California in August 1998. He has competed as a super featherweight and a lightweight. Garcia made his professional boxing debut in a win over Edgar Meza in June 2016. In September 2017 he won the vacant NABF Junior super featherweight title by defeating Miguel Carrizoza. Ryan Garcia won the vacant NABC and WBO-NABO super featherweight titles by beating Jayson Velez in May 2018. In March 2019 he defeated Jose Lopez by TKO to bring his record to 18-0. Garcia challenged Romero Duno for the WBO NABO Lightweight Title in November 2019. On February 14, 2020, Ryan knocked out Francisco Fonseca in the first round.

His brother Sean Garcia is also a professional boxer and his father has been one of his trainers. Ryan Garcia is promoted by Golden Boy Promotions and celebrates his Mexican heritage. He has been trained by Eddy Reynoso.

$700 Million Deal: In September 2019, Ryan's promoter Oscar De La Hoya revealed that he intends help the up-and-comer sign an unprecedented $700 million contract. Oscar thinks Ryan has the ability to become "the biggest star boxing has ever seen, hands down". As of this writing, a contract has not been formalized but $700 million would nearly double the $365 million deal that De La Hoya landed for Saul Alvarez.