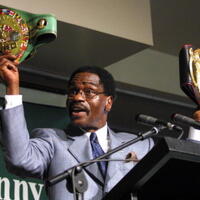 Rubin Carter net worth: Rubin Carter was an American middleweight boxer who had a net worth of $500 thousand dollars. Rubin "Hurricane" Carter was born in Clifton, New Jersey, and after falling into a life of crime in his early-teens, he was locked up in a juvenile detention facility. He escaped the facility and joined the Army. While stationed in West Germany, he began boxing. After returning to the United Sates, he fell back into his old criminal life, and was eventually locked up for four years. After his release, Rubin began boxing again, eventually achieving a ranking of the 3rd best middleweight fighter in the US, in the early 1960s. His career began to decline in the mid-60s, however. He fought 40 bouts and won 27 of them, 19 by knock out. He is most widely remembered for being arrested and imprisoned for a triple homicide in New Jersey in which there was absolutely no evidence against him and for which no eyewitnesses recognized him. The case was finally thrown out in 1985, 18 years after the original trial. Rubin's story was first made famous by the Bob Dylan song "Hurricane" and years later was turned into a movie starring Denzel Washington. Rubin Carter died on April 20, 2014 at the age of 76.