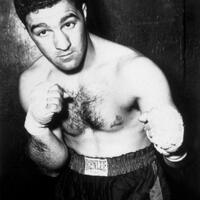 What was Rocky Marciano's Net Worth?

Rocky Marciano was an American boxer who had a net worth equal to $1 million at the time of his death in 1969, after adjusting for inflation. He is considered among the best professional boxers of all time. Rocky Marciano competed from 1947 to 1955. Known for his uncompromising fighting style and powerful stamina, he held the world heavyweight title for four years and finished his career undefeated. Marciano is the only fighter in history to have stopped every opponent he faced for the heavyweight title. He started boxing as an amateur while in the military and he made his professional debut in 1947, though he wasn't officially boxing exclusively as a pro until a year later. Marciano is best known for winning all 49 fights he appeared in during his career as a professional boxer; 43 of those wins came via knockout. He won the World Heavyweight Championship in 1952, a title he defended and held until 1956. Marciano successfully defended his title six times, against competitors including Jersey Joe Walcott, Roland La Starza, and Archie Moore. He retired in April of 1956 when he was 32 years old. Marciano inspired the name of the iconic Rocky Balboa from the "Rocky" movie franchise. Marciano was inducted into the International Boxing Hall of Fame and has several statues erected in his honor around the world. Marciano died in a small plane crash in Iowa on August 31, 1969.

Rocky Marciano was born as Rocco Marchegiano on September 1, 1923 in Brockton, Massachusetts to Italian immigrants Pasqualina and Pierino. He had two brothers named Louis and Peter and three sisters named Alice, Concetta, and Elizabeth. Growing up, Marciano did workouts with homemade weightlifting equipment and a heavy bag. He was educated at Brockton High School, where he played football and baseball. However, Marciano dropped out after the tenth grade.

After dropping out of high school, Marciano took a number of odd jobs. He worked as a chute man on delivery trucks for the Brockton Ice and Coal Company, and also did work as a ditch digger, shoemaker, and railroad layer. In 1943, Marciano was drafted into the US Army. Stationed in Swansea, Wales for two years, he helped ferry supplies to Normandy. He completed his service in 1946 at Fort Lewis, Washington.

While awaiting discharge from the Army, Marciano began his amateur boxing career, and won the 1946 Amateur Armed Forces boxing tournament. After his time in the Army, he fought in the 1948 Golden Gloves All-East Championship Tournament, where he was controversially defeated by Coley Wallace. Marciano continued his amateur career until he suffered an injury at the AAU Olympic tryouts. He finished his amateur career with an 8-4 record.

Disregarding an earlier professional fight (and win) against Lee Epperson, Marciano began his professional boxing career in earnest in July of 1948 with a victory over Harry Bilazarian. He quickly established himself as a powerhouse in the ring, winning all of his first 16 bouts by knockout. The first fighter to last the distance against Marciano was Don Mogard, although he was unable to win. Marciano claimed three more wins via knockout before felling Ted Lowry by unanimous decision. Four more knockout victories came after that, including one over heavyweight Phil Muscato. A few weeks later, Marciano faced Carmine Vingo, whom he also defeated via knockout; an unconscious Vingo nearly died, but pulled through.

In early 1950, Marciano had perhaps his closest match ever when he faced Roland La Starza. Both fighters were undefeated before the bout, which saw Marciano winning by split decision. He went on to notch three consecutive knockouts before rematching Ted Lowry, whom he again beat by unanimous decision. Four more knockouts followed, after which Marciano beat Red Applegate by decision. In the summer of 1951, Marciano appeared on national television for the first time with his knockout win over Rex Layne. Later in the year, he upset Joe Louis in that fighter's final career bout. Marciano finally earned a shot at the world title after four further wins. 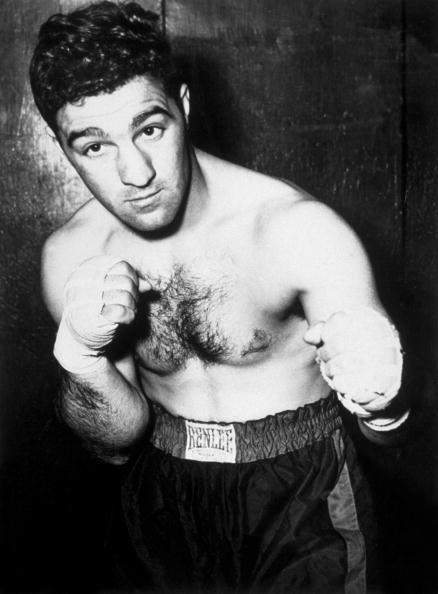 Gunning for the world heavyweight title, Marciano faced champion Jersey Joe Walcott in Philadelphia in September of 1952. Despite Walcott leading on all scorecards, Marciano roared into action in the 13th with his patented "Suzie Q" right hook. With Walcott lying motionless, a stoppage was called, and Marciano became the new world heavyweight champion. A year later, he made his first successful defense of the title in a rematch against Walcott. His second defense came against Roland La Starza. Next came two consecutive bouts against Ezzard Charles, the only fighter ever to last 15 rounds against Marciano. Regardless, Marciano won both fights. He went on to beat Don Cockell via knockout in the ninth round.

Marciano had his final title bout against Archie Moore in September of 1955. Although he was knocked down for a four-count in the second round, he bounced back to retain his title by knocking out Moore in the ninth. Marciano officially retired in the spring of 1956 at the age of 32. He finished his professional career undefeated with a record of 49-0.

Following his retirement from boxing, Marciano began making some appearances on television. He first hosted a weekly boxing show in 1961, and later appeared in an episode of the ABC drama "Combat!" Marciano also served as a referee and boxing commentator for several years, and was a partner and vice president of the San Francisco-based franchise Papa Luigi Spaghetti Dens.

Marciano was flying on a small private plane from Chicago, Illinois to Des Moines, Iowa on August 31, 1969 when the pilot, Glenn Belz, crashed the aircraft while trying to land in bad weather. Marciano and Belz were killed upon impact, as was the other passenger, Frankie Farrell. Marciano was survived by his wife Barbara and children Mary Anne and Rocco.

Marciano's legacy in the sports world is enduring. Considered one of the greatest boxers of all time, he ties the record with Brian Nielsen for having the longest undefeated streak by a heavyweight. Marciano is also the only world heavyweight champion ever to go undefeated. Among his other milestones, he holds the record for the highest knockout percentage of any heavyweight champion, with 87.76%.