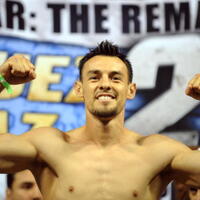 Robert Guerrero Net Worth: Robert Guerrero is an American professional boxer who has a net worth of $5 million dollars. Robert Guerrero was born March 27, 1983 in Gilroy, California. Known also by the nickname The Ghost, he is the former interim WBC welterweight champion. He is also a former IBF Super Featherweight world champion, a former interim WBA and WBO lightweight champion and a former two-time IBF featherweight champion. Guerrero's coach is Ruben Guerrero and he is managed by both Bob Santos, Luis Decubas Jr. and Al Haymon. After an impressive amateur career at a very young age, Guerrero turned professional at the age of 18. In his first world championship fight on September 2, 2006, Guerrero defeated Aiken by an eighth-round technical knockout in Los Angeles. Guerrero lost the belt in his next fight in a mandatory defense to future Featherweight champion Orlando Salido in Las Vegas when he won but was stripped of the title over suspicion of steroid use. He was given a later shot at the vacant featherweight title, which he won by a ninth-round technical knockout against Albanian boxer Spend Abazi. Two spectacular title defense wins over Martin Honorio (TKO1) and Jason Litzau (KO8) followed, but what made Guerrero's victories even more impressive was that he was able to perform while his wife Casey battled Leukemia. Casey was diagnosed with the disease right before Guerrero's bout with Honorio in October of 2007. Guerrero had to vacate his world title to care for his wife and his career was put on hold. Today, Casey is alive and well after several resurgences of the disease before having a successful bone marrow transplant. Robert Guerrero was able to return to the ring in April of 2010, where he continues to impress the world of boxing.