Riddick Bowe net worth: Riddick Bowe is a retired American professional boxer who has a net worth of $30 thousand. Riddick Bowe was a two-time former world heavyweight champion who won his first WBA, WBC, and IBF in 1992. Bowe was born on August 10, 1967 in Brooklyn New York. Bowe was the 12th of 13 children. Riddick Bowe and his family grew up in a section of Brooklyn called Brownsville which was known as one of New York's toughest slums. He lost a brother Henry to the AIDS virus and a sister Brenda from stab wounds after an attempted robbery in 1988. In 1984, at the age of 17, as an amateur boxer Riddick knocked out James Smith in just 4 seconds. He participated in the 1988 Seoul Olympics where he won a silver medal and was a winner of four New York Golden Gloves Championships from 1985-1988. Bowe began his professional boxing career in March of 1989, with a KO on novice Lionel Butler. Some of his other knock-out victims include; Bert Cooper, Olympic super-heavyweight gold medalist Tyrell Biggs, Bruce Seldon and Pierre Coetzer. Riddick married his high-school sweetheart Judy on April 27, 1988 and they have five children. After years of alleged abuse by Riddick on both his wife and children the couple separated in May of 1998 and Judy filed for a divorce. Five months after the separation Bowe was arrested and later convicted of kidnapping his estranged wife and children, he served 17 months in a federal prison. Riddick Bowe is unfortunately one of many athletes who have gone broke after successful careers. 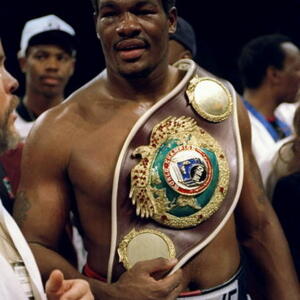