Peter Quillin net worth: Peter "Kid Chocolate" Quillin is an American professional boxer who has a net worth of $500 thousand. He is trained by 4-time trainer of the year, Freddie Roach, and is signed to Oscar de la Hoya's Golden Boy Promotions. Quillin was born in 1983 in Chicago, Illinois but was raised in Grand Rapids, Michigan.

During his amateur boxing career he had 15 fights and soon after the tall, aggressive fighter turned pro in New York. He had most of his fights on television where he flaunted one-punch knockouts, and created quite a following for himself as a young boxer. He was given the nickname, Cuban Kid Chocolate due to his physical resemblance to the World Champion boxer from the 1930's, Eligio Sardiñas Montalvo, and the Cuban heritage that both of the boxers share. In 2008, Quillin defeated Dionisio Miranda by unanimous decision at the Hard Rock in New York City, which helped him to begin working with trainer, Freddie Roach. Quillin moved from New York to Los Angeles in 2010 to train with Roach and by 2011 went on to fight and stop title contender Jesse Brinkley, which was the win that landed him in the vacant US Boxing Organization Super Middleweight Championship. Later that same year, he beat LeHoullier cleanly by points, and made an impressive HBO debut by stopping Craig McEwan in the sixth round. In 2012, Quillin fought Winky Wright and won by unanimous decision causing Wright to retire. He is currently undefeated and rumored to be fighting Floyd Mayweather in 2014. 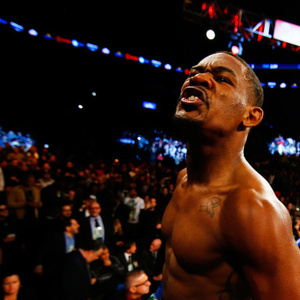