Angel Garcia net worth: Angel Garcia is a Mexican American professional boxer who has a net worth of $3 million. Angel Garcia was born in Ventura, California in December 1987. He is trained by his father Eduardo Garcia as well as his brother, former world champion Roberto Garcia. Angel started his amateur career at 14 years old and defeated current Light Welterweight Champion Danny Garcia.

Angel won a Silver Medal at the National Junior Olympic Championships in 2003 and a Gold Medal at the National Junior Golden Globes Championships in 2004. Garcia made his professional boxing debut with a win over Herrera Mendoza in July 2006. He defeated Tomas Villa in April 2010 to win the USBA Featherweight title. Garcia beat Matt Remillard in March 2011 to win the NABC and WBO NABO Featherweight titles. He won the WBO and the Ring Magazine Featherweight tiles in January 2013 by defeating Orlando Salido. He won the SBO Super featherweight title by beating Roman Martinez in November 2013. Garcia's last fight was a win over Juan Carlos Burgos in January 2014 to bring his record to 34 – 0 – 0 with 28 knockouts. 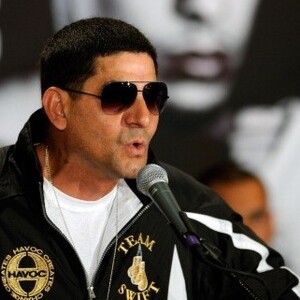