Sugar Ray Leonard Fight Earnings: On April 6, 1987, Marvin faced Sugar Ray Leonard at Caesars Palace in Paradise, Nevada. Sugar Ray had initially retired in 1982. He retired again in 1984. In 1986 he said he would come out of retirement again only if he could face Hagler. Hagler was guaranteed $12 million for the fight. Leonard was guaranteed $11 million. Both fighters also had a percentage of the Pay Per View profits. Hagler lost. It would be his final professional match. In the end, he walked away with $20 million before taxes. That's the same as around $46 million in today's dollars. Leonard made a total of $12 million. At the time it was the most lucrative boxing match of all time. There was talk of a rematch. Initially Leonard resisted because he retired once again. Also, his longtime trainer Angelo Dundee quit after being upset to have only been paid $150,000 out of Leonard's $12 million. By the time he agreed to the rematch, which would have guaranteed both fighters $15 million just to show up, Hagler was already enjoying his retirement and working regularly as a film actor in Italy.

Marvin was born in Newark, New Jersey on May 23, 1954. He discovered an interest in boxing at a gym owned by Pat and Goody Petronelli. He ended up winning a fight against Terry Dobb in 1973 and was named the AAU 165 pound champion. Hagler's training history includes the Petronelli's and a ritualistic routine that involved training in empty Cape Cod motels during the winter. He would run in combat boots and often backwards.

He was a middleweight boxer with a southpaw stance and a record of 67 fights, 62 total wins, 52 wins by knockout, three losses, two draws, and zero contests. He stood at five feet and nine inches tall with a reach of 75 inches. He was known as the Undisputed World Middleweight Champion from 1980 to 1987 and was later inducted into the International Boxing Hall of Fame as well as the World Boxing Hall of Fame. Other titles have included "Fighter of the Year" and "Fighter of the Decade." He was listed as the fifth greatest middleweight boxer of all time according to Boxrec.

Marvin had five children with his first wife. In 2000 he married his second wife, Kay. They lived together in Milan, Italy until his death in 2021. 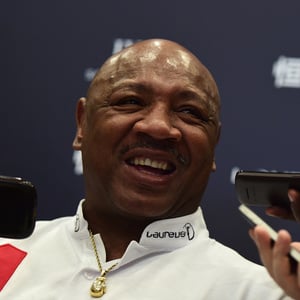