Julio Cesar Chavez Jr net worth: Julio Cesar Chavez, Jr. is a Mexican professional boxer who has a net worth of $4 million dollars. Born in Culiacán, Sinaloa, Mexico, Julio Cesar Chavez, Jr. grew up around boxing, and has been associated with the sport since he was a child. His father is Mexican boxing legend, Julio Cesar Chavez, Sr., and there are multiple photos of the Julio Jr., watching his father fight from ringside. He spent much of his childhood and young adulthood out of the spotlight, but his announcement that he would be following in his father's footsteps brought instant fame. He fought two amateur bouts before going professional at age 17. He won his debut match, and continued to fight well throughout 2003. In 2004, he fought every month of the year, except for August, and established himself as a boxer of note, separate from his father. He has gone on to win 45 of his 47 fights, 31 one of them by knockout. The two bouts that he did not win were not losses. Instead, one was a "no-contest", the other, a draw. He is the current WBC Middleweight Champion. 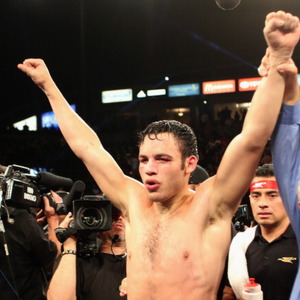