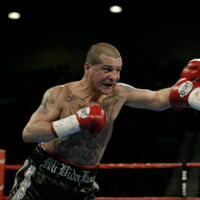 Johnny Tapia Net Worth: Johnny Tapia was an American boxer who had a net worth of $3 million. Johnny Tapia was born in Albuquerque, New Mexico in February 1967 and passed away in May 2012. Tapia was a five time boxing World Champion. As an amateur he was the 1983 National Golden Gloves light flyweight champion and the 1985 National Golden Gloves flyweight champion. He started his professional career in 1988 in a draw. Tapia held the WBO Super Flyweight Championship from October 1994 to December 1998. He was the IBF Super Flyweight Champion from July 1997 to December 1988 and the WBA Bantamweight Champion from December 1998 to June 1999. He held the WBO Bantamweight Championship from January to September 2000 and the IBF Featherweight title from April to November 2002. Tapia finished his career with a record of 59 – 5 – 2 with 30 wins by Knockout. He authored an autobiography titled Mi Vida Loca. Johnny Tapia passed away on May 27, 2012 at 45 years old of heart failure.