Joe Calzaghe net worth: Joe Calzaghe is a retired Welsh boxer who has a net worth of $10 million. His nicknames include The Pride of Wales, The Italian Dragon and Super Joe. Joe Calzaghe was born in Hammersmith, London, England on March 23, 1972, and his family moved to Wales when he was only two years old.

He began boxing at the age of nine and made his first professional fighting debut in 1993. In July 1997 he defeated Chris Eubank to win the WBO Super Middleweight title, a belt he defended 21 times. In March 2006 he beat Jeff Lacy to retain his WBO title, as well as win the IBF and "The Ring" Super Middleweight titles. In November 2007 he won a unanimous decision against Mikkel Kessler to earn the WBA (Super) and WBC Super Middleweight titles. The following year he earned a split decision victory against Bernard Hopkins to win "The Ring" Light Heavyweight title. His final fight was against Roy Jones Jr. at Madison Square Garden on November 8, 2008. He announced his retirement in 2009, finishing with a career record of 46 wins (with 32 knockouts), zero losses and zero draws. He's only the 10th World Champion boxer to retire as an undefeated World Champion. 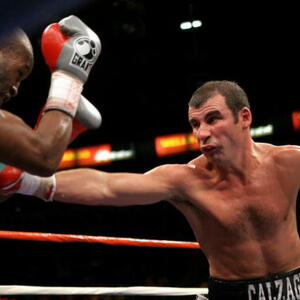