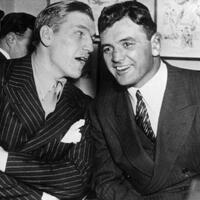 James J. Braddock Net Worth: James J. Braddock was an American boxer who had a net worth of $100 thousand. James Walter Braddock was born in New York City, New York in June 1905 and passed away in November 1974. Braddock was born just a couple blocks from Madison Square Garden. He became a professional boxer at 21 years old. He fought for three years and posted a record of 44-2-2. Braddock upset Tuffy Griffiths in 1928 and earned a title fight in 1929 but narrowly lost. After that his career went into a slump and he lost several bouts to due chronic hand injuries. Braddock gave up boxing and worked as a longshoreman and collected social assistance to help feed his family in the Great Depression. He upset John Griffin in 1934 after returning to boxing. In 1935 Braddock defeated Max Baer to win the NYSAC and NBA World Heavyweight titles. He also earned the nickname "Cinderella Man". In 1937 he lost those titles to Joe Louis in his second to last fight. Braddock was known for his powerful right hand and was managed by Joe Gould. James was married to Mae Fox in 1930 and had three children. James J. Braddock passed away on November 29, 1974 at the age of 69. In 2001 he was inducted into the International Boxing Hall of Fame and he was immortalized by the 2005 film Cinderella Man.