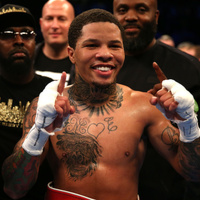 In December 2019 Gervonta defeated Yuriorkis Gamboa with a TKO in the final round.