He was ranked #4 by ESPN on their greatest chin in boxing history list. Chuvalo lost stoppage defeats to George Foreman and Joe Frazier although they were unable to knock him down or out. Chuvalo first fought for a world title against Ernie Terrell in 1965 when he lost in a 15 round decision. He again lost in a 15 round decision to Muhammad Ali in 1966 for the world title. Some of Chuvalo's notable wins came against Willi Besmanoff, Doug Jones, Yvon Durelle, Jerry Quarry, Cleveland Williams, and Joe Bygraves. George Chuvalo was a five time Canadian Heavyweight Champion. In 1996 Chuvalo was inducted into the Ontario Sports Hall of Fame. He finished his career with a record of 73 – 18 – 2 with 64 KOs. 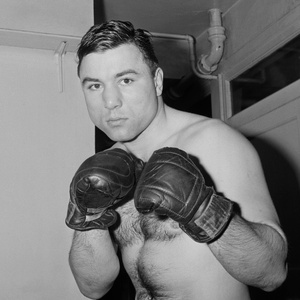