How much is Erik Morales Worth?

Erik Morales net worth: Erik Morales is a Mexican former professional boxer who has a net worth of $3 million. Erik Morales was born in Tijuana, Baja California, Mexico in September 1976. Morales is the first Mexican born boxer who has won world titles in four different weight classes. He has been a WBC light welterweight champion, WBC/IBF super featherweight champion, WBC featherweight champion twice, and WBC/WBO super bantamweight champion. Over his career Morales has beat 15 different world champions. He is well known for his fight trilogies against Manny Pacquaio and Marco Antonio Barrera. Morales is ranked #49 on ESPN's 50 Greatest Boxers Of All Time list. He made his professional debut in March 1993 defeating Jose Orejel and his last fight was a loss to Danny Garcia in October 2012. Morales had a record of 52 – 9 with 36 knockouts. He currently manages the parks and recreation department in Tijuana, Mexico. In May 2015 he agreed to train Jesse Vargas for his fight against Timothy "Desert Storm" Bradley, Jr. 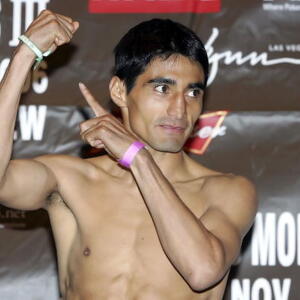