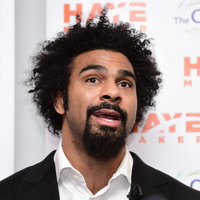 David Haye Net Worth: David Haye is an English professional boxer from London who has a net worth of $20 million dollars. Born October 13, 1980 in Bermondsey, London, England, David Haye is a former WBA heavyweight champion, the former unified world cruiserweight champion, former European cruiserweight champion and holds the WBA, WBC and The Ring cruiserweight titles. Haye's career began at an old-school boxing gym called Fitzroy Lodge Boxing Club in Lambeth, South London, where he won his first amateur bouts. In 1999, he competed at the world amateur championship at the age of 18 in Houston, Texas. Haye is known as a hard-hitting boxer and one of the few genuine crossover stars in the sport of boxing (crossing from heavyweight to cruiserweight). Born to a Caucasian mother and a Jamaican father, Haye lived most of his childhood in England and attended Bacon's College in South East London. He is now a North Cyprus citizen as well as a U.K. citizen and is married to Natasha. The couple's son, Cassius, was named after one of the greatest boxers who ever lived, Cassius Clay (Muhammad Ali).