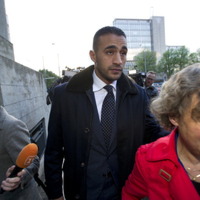 Badr Hari net worth: Badr Hari is a Moroccan-Dutch super heavyweight kickboxer who has a net worth of $5 million dollars. Badr Hari was born in Amsterdam, Netherlands, and began practicing kickboxing when he was in elementary school. He was very successful in Amsterdam throughout his early career, and fought all of his matches under the Dutch flag. However, after losing an important bout in 2005, with his parents in the audience, the crowd boo'd him loudly and continuously. He subsequently chose to fight for Morocco instead of the Netherlands. He began to make an international name for himself fighting on the K-1 circuit in 2005. He lost as many bouts as he won initially, but in 2007, he won the first ever K-1 Heavyweight Championship. He seemed to hit his stride after that. To date, he has won 102 of his 114 professional matches, 88 of them by knockout. He has had numerous run-ins with the law over the years, and is currently under investigation in relation to an assault charge.