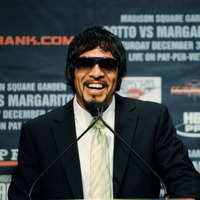 What is Antonio Margarito's Net Worth?

Antonio Margarito is a Mexican-American retired professional boxer who has a net worth of $15 million. Antonio Margarito competed for several boxing organizations between 1994 and 2017, including the WBO, IBF, and WBA. He held a number of welterweight world championships during his career, and also challenged a few times for the light middleweight world title. In 2009, Margarito was caught using illegal hand wraps containing calcium sulfate, a revelation that called into question his famous stoppage victory over Miguel Cotto the year before.

Antonio Margarito was born as Antonio Margarito Montiel on March 18, 1978 in Torrance, California. At the age of two, he moved with his family to Tijuana, Mexico, where he spent much of his time boxing with his brother. Margarito went on to have a fairly brief career as an amateur boxer, during which he amassed an 18-3 record.

Due to financial struggles, Margarito turned professional earlier than he would have otherwise. At the age of 15, he made his debut in a match against Jose Trujillo, winning by decision. Later, in a bout against Victor Angulo, he recorded his first knockout. Margarito's first defeat came five months after that to Victor Lozoya. After posting a 4-2 record over his next six bouts, his financial situation improved and he went on to go 28-2-1. Margarito posted wins against such competitors as Sergio Martínez, David Kamau, Alfred Ankamah, and Frankie Randall during this time.

Margarito got his first go at the WBO welterweight title in the summer of 2001 when he went up against Daniel Santos. However, the fight was stopped in the first round after the two fighters suffered deep wounds from a head-to-head clash. As a result, Santos retained the welterweight title; he later vacated it so he could progress in weight class. Margarito thus got another chance at the welterweight title, this time against Antonio Díaz. Ultimately, he defeated Díaz via knockout to become the new WBO welterweight champion. Margarito subsequently defended the title by beating Danny Perez Ramírez, Andrew Lewis, and Hercules Kyvelos. He continued to defend his crown through 2007, when he finally lost it to the undefeated Paul Williams.

In late 2003, Margarito made his debut in the light middleweight division with a knockout victory over Maurice Brantley. The following year, he faced his former rival Santos for the WBO light middleweight title, ultimately losing by technical decision.

Margarito faced his former competitor Kermit Cintron for the IBF welterweight title in 2008, and won via knockout in the sixth round. Following this, he was ordered by the IBF to fight a mandatory defense against Joshua Clottey, the top contender in the organization. However, Margarito vacated his IBF title so he didn't have to fight Clottey. Instead, he agreed to a bout with WBA welterweight champion Miguel Cotto. The match was a highly memorable one, with Margarito punching his way back from an early deficit to claim victory via technical knockout in the 11th round. He went on to lose his WBA welterweight title to Shane Mosley in early 2009. 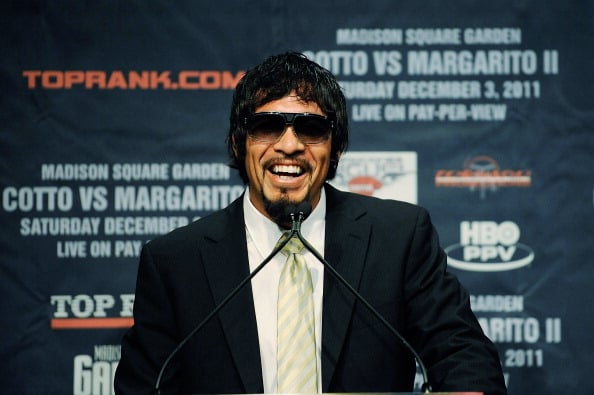 After some time away from the ring, Margarito had his comeback fight in May of 2010 against Roberto García for the vacant WBC international light middleweight title. Ultimately, Margarito won by unanimous decision. He next faced Manny Pacquiao for the WBC light middleweight championship, which he lost by unanimous decision after taking a heavy drubbing from Pacquiao. Directly following the fight, Margarito was rushed to the hospital.

Margarito faced off against his former rival Miguel Cotto for a rematch in late 2011. Cotto ended up defeating Margarito via TKO by doctor stoppage, as Margarito's right eye had swollen shut. After the fight, Margarito announced his retirement from boxing.

In 2016, Margarito came out of retirement briefly to win two bouts in Mexico. The next year, he beat Carson Jones.

Before Margarito's fight against Mosley in 2009, the latter fighter's trainer noticed a white substance in Margarito's hand wraps. It was eventually discovered that the substance was calcium sulfate, which forms plaster of Paris when combined with moisture. This is illegal in professional boxing. Although Margarito claimed ignorance about the hand wraps, he and his trainer had their licenses suspended, effectively forbidding them from competing in the US.

Margarito married his first wife, his high school sweetheart Michelle, in 1999. After their divorce, he wed Lorena. The couple lives in Los Angeles, California.