What is Anthony Joshua's Net Worth and Career Earnings?

Anthony Joshua is a British professional boxer who has a net worth of $80 million. Anthony is one of the highest-paid athletes in the world. At his peak he earned $50-60 million per year, or more. He is a heavyweight who at one time held the unified world heavyweight championship.

Joshua was born on October 15, 1989 in Watford, Hertfordshire in England. His mother, Yeta, is Nigerian while his father, Robert, is Nigerian and Irish. During his early years, Joshua lived in Nigeria at a boarding school, the Mayflower School in Ikenne.

When his parents divorced when he was 12 years old, he returned to the United Kingdom and began attending Kings Langley Secondary School. He played soccer and was generally very athletic, breaking the schools 100 meter race record. However, he did not start boxing until age 18, a rather late start in the sport, and before beginning to box full-time, he worked as a bricklayer.

After starting to box in 2007, Joshua quickly improved. He joined the Finchley ABC club in North London, also home to the professional heavyweight boxer Derek Chisora. By 2009, Joshua was already winning competitions, including the Haringey Box Cup. In 2010, he won the senior ABA Championships and turned down the opportunity to turn professional, preferring to stay amateur until he had secured more wins.

By not going pro he turned down a $60,000 payday. He later explained his decision:

He earned a spot on the Great Britain Boxing team and became the GB amateur champion in 2010. In 2011, he almost won the European Championships but was defeated by Romanian Mihai Nistor. He was still named the Amatuer Boxer of the Year in 2011 after having maintained a record of 40-3.

Joshua's early success earned him a spot in the 2012 London Olympics. After several heavily contested and criticized matches, Joshua secured the Olympic gold medal, though several critics in the sport say that the home advantage of having the Olympics in England played a role in this decision. The following year, in 2013, he was appointed Member of the Order of the British Empire for services to boxing.

The following year, in September of 2015, Joshua became the Commonwealth Heavyweight Champion after defeating the undefeated Scottish boxer Gary Cornish. Joshua was able to stop Cornish only 90 seconds into the first round. Soon after, in December, he defeated another undefeated champion, Dillian Whyte. The match finished in a KO in the seventh round and it was reported that Joshua had won three million pounds for this fight alone.

In February of 2016, Joshua won his first world title by defeating IBF Heavyweight Champion Charles Martin at the O2 Arena. In June, he then defeated Dominic Breazeale in seven rounds. In November, he successfully defended his IBF title against Eric Molina. 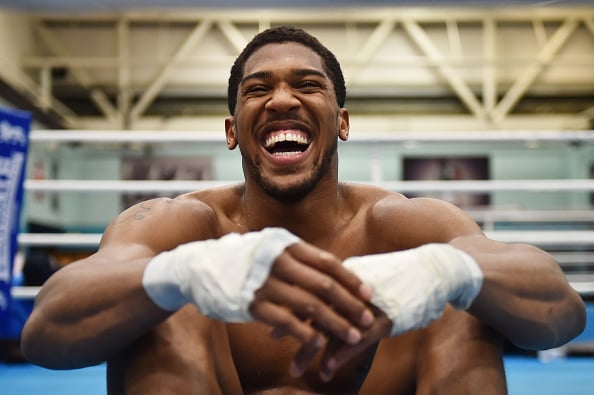 It was then agreed by the WBA that there would be a unification bout between Joshua and Wladimir Klitschko for the vacant WBA Super Title. Sales for the fight broke a box office record. In front of a crowd of over 90,000 Joshua beat Klitschko in a very dramatic TKO. Though there was much talk of a rematch between the two, Klitschko ultimately announced he was retiring from boxing the following year. Joshua was able to retain his world titles through 2017 after fighting Carlos Takam, though Takam maintains that the fight was stopped too early.

In 2018, Joshua defeated fighter Joseph Parker in Cardiff in twelve-rounds, the longest match Joshua had ever been forced to fight in his entire 20-0 career. He claimed Parker's WBO Heavyweight title. He later fought and defeated Alexander Povetkin in seven rounds to maintain his world titles. He continued to dominate throughout much of 2019 and 2020.

In April 2017 he defeated Wladimir Klitschko to win the vacant WBA (Super) and IBO heavyweight titles and bring his record to 19 – 0 with 19 knockouts. He earned $17 million from the fight.

On June 1st 2019 Anthony was defeated by a relative unknown named Andy Ruiz, Jr. In Ruiz's previous match he made $200,000. For defeating Joshua, Ruiz made $7 million. Anthony made $25 million from the fight when all income sources are included. The loss put a predicted future $60 million payday to fight Deontay Wilder on very shaky ground.

Between June 2017 and June 2018, Anthony Joshua earned $42 million from purses and endorsements. Much of that was the $20 million he earned fighting Alexander Povetkin. He was supposed to earn $25 million for his next fight against Jarrell Miller which was canceled after Miller failed several drug tests.

Between June 2018 and June 2019, Anthony earned a staggering $54 million, the majority of which came from his fight against Ruiz. That was enough to make him one of the highest-paid athletes in the world.

Joshua has had a few run-ins with law enforcement. In 2009, he was put on remand in Reading Prison for getting into fights and had to wear an electronic ankle tag upon release. In March of 2011, he was pulled over for speeding in North London and was charged with possession of of cannabis after eight ounces of the drug were found hidden in a sports bag in his car. He was thus suspended from the GB Boxing squad and was sentenced to 12 months of community order and 100 hours of unpaid work after pleading guilty to the offense.

Joshua has stated that he enjoys tactical games like chess as a way to improve his boxing abilities. He is not a big fan of soccer but does support Real Madrid. He has cited Muhammad Ali, Mike Tyson, Larry Holms, Lennox Lewis, and Evander Holyfield as some of his boxing idols.

Joshua has been romantically linked to a number of women over the years. It was reported that he and model Cara Delevigne were seeing each other in 2014. In 2015, Joshua had a son named Joseph with dance teacher Nicole Osbourne. He was also pictured with model Bella Hadid in 2016, starting rumors that the two were dating but a relationships ultimately failed to materialize. 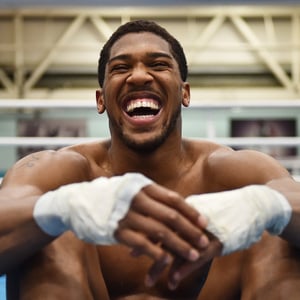