Andy Ruiz Jr. net worth, salary and purse: Andy Ruiz Jr. is an American professional boxer who has a net worth of $10 million. Andy first rose to international fame in June 2019 when he upset the heavily favored Anthony Joshua. He earned $7 million from the upset. With the win he became the first boxer of Mexican heritage to be a world heavyweight champion.

Andy still lives in his hometown of Imperial, California. He is married and has give children. After defeating Joshua, Andy became a media star. He appeared on talks shows, threw out the first pitch at a Dodgers game, had a hometown parade and met with the President of Mexico.

Earnings: Prior to the first bought against Joshua, Andy's total boxing earnings topped $300,000. When he beat Anthony Joshua, his total income including Pay Per View and win bonus topped $7 million.

For the December 2019 re-match, Andy Ruiz Jr. will earn a guaranteed $9 million before Pay Per View, merchandise and endorsements. Anthony Joshua, still considered the main draw, was guaranteed $60 million for the re-match. 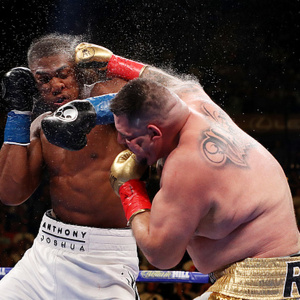