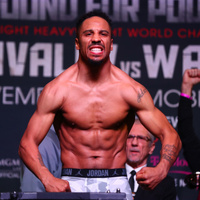 Andre Ward net worth, career earnings and salary: Andre Ward is a retired American professional boxer who has a net worth of $8 million. By the time of his retirement, Andre held eight world titles in two weight classes. Andre Ward was a WBA (Super), WBC and The Ring Super Middleweight Champion, among his many accolades. Ward was born on February 23, 1984 in San Francisco, California. He was raised in Hayward and he attended Fairview Elementary, Bret Harte Junior High School and Hayward High School. While attending high school he was a running back and safety on the football team. At the age of 17, he met boxer Andre Dirrell. He started his amateur boxing career in 1994 and had a record of 110–5. As a professional fighter, his record was 32 and 0 with 16 wins by knockout. Andre has two sons and a daughter and currently resides in in Dublin, CA and trains in Oakland, CA. Ward was a Gold Medalist at the 2004 Summer Olympics in the Light Heavyweight division. He was named fighter of the year by Ring Magazine in 2011. Nicknamed S.O.G. (Son Of God) Ward has been ranked #6 by Yahoo Sports, as #7 by Sports Illustrated and #5 by The Ring. He is of both Irish and African American descent. Andre Ward earned $1.85 million when he fought Sullivan Barrera in June 2016. He earned $5 million fighting Sergey Kovalev in November 2016. He earned a career-high $6.5 million guaranteed when he fought Sergey Kovalev for a second time in June 2017. On September 21, 2017, Andre announced that he was retiring from boxing at the age of 33. Ward is expected to continue working as a TV boxing analyst.