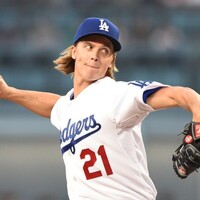 What is Zack Greinke's Net Worth and Salary?

Zack Greinke was drafted by the Kansas City Royals in 2002. He spent the next two years in the Minor Leagues playing for various teams, and earned multiple accolades, including The Sporting News Minor League Player of the Year Award. In 2004, he began playing in the Majors with the Royals. His time with the team was initially quite uneven, as the social anxiety disorder he had experienced since childhood roared to the fore. However, after getting this control, he went on to pitch successfully and eventually won the Cy Young Award.

In December 2015, Zack Greinke signed a six-year $206 million contract with the Arizona Diamondbacks.

Between June 2017 and June 2018, Zack Greinke earned $24 million from salary and endorsements. As of September 2018 he had earned $191 million from MLB salaries alone.

Zack's base salary for the 2019 season was $32 million. Going into that season Zack had earned $250 million in salary alone, with $70 million left on his contract.

Zack Greinke was born as Donald Zackary Greinke on October 21, 1983 in Orlando, Florida to teachers Donald Sr. and Marsha. He is of German ancestry, and has a younger brother named Luke. Growing up, Greinke was involved in Little League baseball, and also had success in golf and tennis tournaments. In 1999, he helped lead his team to the Senior League World Series title. Greinke went to Apopka High School, where he began as a shortstop. In his sophomore and junior years, he was a relief pitcher; he then became a starting pitcher in his senior year. As a senior, Greinke posted 118 strikeouts across 63 innings. He led his team to a 32-2 record and a third consecutive district title, and was named Gatorade National Player of the Year. After high school, Greinke played in the Florida Athletic Coaches Association All-Star Classic.

Career Beginnings in the Minors

In 2002, Greinke was chosen in the first round by the Kansas City Royals. He went on to pitch in six minor league games for the Royals farm teams the Gulf Coast Royals, the Low-A Spokane Indians, and the High-A Wilmington Blue Rocks. Greinke was soon promoted to the AA Wichita Wranglers. In 2003, he was named Minor League Pitcher of the Year, and in 2004 was promoted to the Pacific Coast League's Omaha Royals.

Greinke was called up to the majors in May of 2004; he subsequently made his debut against the Oakland Athletics. In June, he notched his first career win when he pitched seven scoreless innings in a game against the Montreal Expos. Just days later, Greinke had his first major league hit when he homered off of Arizona Diamondbacks pitcher Russ Ortiz. However, things were not going so smoothly for Greinke beyond the game; struggling with anxiety and depression, he nearly quit in 2005. A year later, he was placed on the 60-day disabled list and took a hiatus from baseball. To help matters, Greinke started seeing a sports psychologist and taking medication.

Greinke returned to the Royals in 2007, making 52 appearances and 14 starts. He performed better the next year, making 32 starts, posting 183 strikeouts, and recording a 3.47 ERA. Greinke had his peak with the Royals in 2009, when he pitched 39 scoreless innings in a row. Striking out 15 batters in an August game, he set a team record for single-game strikeouts. In honor of his achievements, Greinke won the AL Cy Young Award. 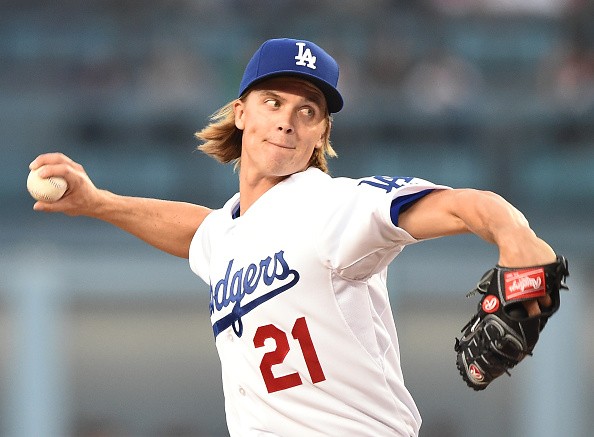 After requesting a trade from the Royals in 2010, Greinke was traded to the Milwaukee Brewers. Due to a fractured rib, he started the subsequent season on the disabled list. In May, he made his Brewers debut. Despite his injury-shortened season, Greinke still managed to finish second on the team in wins with a record of 16-6; he also had 201 strikeouts and a 3.83 ERA. The next season, his last with the Brewers, Greinke made 21 starts and had a 9-3 record.

Greinke was traded to the Los Angeles Angels in July of 2012. Notably, he became the first pitcher in over 90 years to post 13 strikeouts in fiving innings or less, something he achieved in a game against the Seattle Mariners. Greinke finished his tenure with the Angels with a 6-2 record and a 3.53 ERA.

In late 2012, Greinke signed a six-year free agent contract with the Los Angeles Dodgers. He missed several games due to injury during the season, but returned in May of 2013. In August, he notched his 100th career win and was named National League Pitcher of the Month. Greinke finished his debut Dodgers season with a 15-4 record, and was given the Silver Slugger Award. He had another phenomenal season in 2014, posting a 17-8 record and a 2.71 ERA in 32 starts, and winning the Gold Glove Award. The season after that, he finished with a 19-3 record, 200 strikeouts, and a 1.66 ERA. After pitching in two games in the NL Division Series, Greinke decided to opt out of his remaining three years with the Dodgers.

Greinke signed a six-year contract with the Arizona Diamondbacks in late 2015. In August of the following year, he posted his 2,000th career strikeout in a win over the Atlanta Braves. Greinke was selected to the NL All-Star team in 2017. That year, he finished with a 17-7 record and 215 strikeouts. In 2018, Greinke won his fifth consecutive Gold Glove Award, and in 2019 won his second Silver Slugger Award.

Greinke was traded to the Houston Astros in July of 2019; on the team, he went 8-1 with a 3.02 ERA. Moreover, he made it to his first World Series, starting Games 3 and 7 for the Astros. Among his other achievements on the team, Greinke earned his first career Opening Day win in 2021, and reached 3,000 career innings. He went on to another World Series, where he became the first pitcher to make a World Series pinch hit in nearly 100 years. In November of 2021, Greinke became a free agent.

Greinke is married to his high-school sweetheart Emily Kuchar, a former cheerleader for the Dallas Cowboys. They have three sons, and live in Greinke's hometown of Orlando.