He finished his NPB career with a 93-38 win-loss record, a 1.99 earned run average, and 1,259 career strikeouts. Darvish made his Major League Baseball debut with the Texas Rangers on April 9, 2012. Since then, through September of the 2014 season, Darvish has posted a 39-25 win-loss record to go along with a 3.27 earned run average and 680 strikeouts. The right-handed starting pitcher wears number eleven with the Rangers. He has won dozens of career awards, including three MLB All-Star awards. In 2013, he was crowned the American League Strikeout Champion. While playing in the NPB, Darvish was a five-time league All-Star and won several Pacific League Mitsui Golden Glove awards to go along with the Eliji Sawamura Award. He was twice named MVP of the Pacific League. Darvish has competed internationally for Japan's national team, helping to secure a gold medal at the 2009 World Baseball Classic in Los Angeles. Darvish is involved in several charitable efforts and created a fund meant to help create clean water in developing countries. 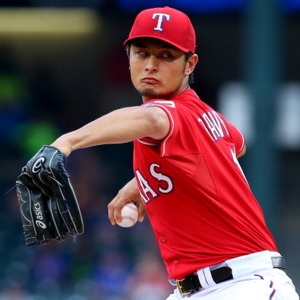