Yoenis Cespedes net worth and salary: Yoenis Cespedes is a Cuban professional baseball player who has a net worth of $60 million. Yoenis Cespedes was born in Campechuela, Granma Province, Cuba in October 1985. He is an outfielder who bats and throws right handed. Cespedes played in Cuba before coming to the United States and has also represented the Cuban national team in international competition.

He signed with the Oakland Athletics as a free agent and made his Major League Baseball debut in 2012. Cespedes played for the Athletics from 2012 to 2014 and also for the Boston Red Sox in 2014. He played for the Detroit Tigers in 2015 and was traded to the New York Mets the same year where he still plays as of 2016. Cespedes is a two time MLB All-Star in 2014 and 2016 and won a Gold Glove Award in 2015 and a Silver Slugger Award in 2016. He also won the Home Run Derby in both 2013 and 2014. Cespedes signed a four year deal for $36 million with Oakland in 2012. In 2016 he signed a three year deal with the Mets worth $75 million. He also collects exotic cars which add up to about $1 million. Between June 2017 and June 2018, Yoenis Cespedes earned $26 million between salary and endorsements. 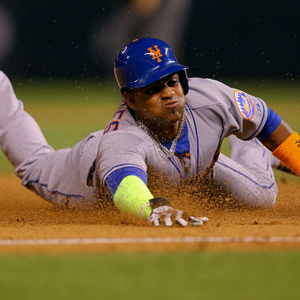