Yasiel Puig Net Worth and salary: Yasiel Puig is a Cuban professional baseball player who has a net worth of $18 million. Yasiel Puig was born in 1990 in Cienfuegos, Cuba, and defected from his home country in 2012. That same year he signed a 7-year $42 million deal with the Dodgers. He made his Major League Baseball debut on June 3, 2013 with the Los Angeles Dodgers when he was 22 years old. Puig, a right-handed center fielder, has played every game of his pro career with the Dodgers as of the fall of 2014. He earned his first MLB All-Star honor during the 2014 season. He is a two-time National League Player of the Month and earned National League Rookie of the Month honors in June of 2013. Through the 2014 season, Puig has amassed a .305 career batting average to go along with 287 hits, 35 home runs, and 111 runs batted in. After his first season in the league, he earned All-Rookie team honors from the "Baseball America" publication. He played for Cuban's national team prior to his defection, helping secure a bronze medal at the 2008 World Junior Baseball Championship in Edmonton. Puig has made headlines for several off-the-field incidents, including a 2013 reckless driving arrest in Tennessee. That charge was eventually dismissed after he completed community service. About seven months later, Puig was arrested for reckless driving a second time, though that charge was later dropped. 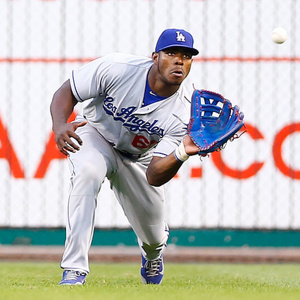