Yadier Molina Net Worth: Yadier Molina is a Puerto Rican professional baseball player who has a net worth of $45 million. Yadier Molina was born in Bayamon, Puerto Rico in July 1982. He is a catcher who bats and throws right handed. His father Benjamin Molina, Sr. played second base as an amateur and was elected into the Puerto Rican baseball hall of fame.

Yadier's older brothers Bengie and Jose Molina both became major league catchers. Yadier was selected by the St. Louis Cardinals in the fourth round of the 2000 MLB Draft. Molina made his major league debut in 2004. He has played his whole career for the Cardinals. Molina has won two World Series Championships with the Cardinals in 2006 and 2011. He is a six time MLB All-Star from 2009 to 2014. He was also a six time Rawling Gold Glove Award winner from 2008 to 2013 including a two time National League Platinum Glove Award winner. Yadier has won the Fielding Bible Award six times. He won a Silver Slugger Award in 2013 and a TWIB/GIBBY Award in 2012-13. Molina has represented Puerto Rico in international competition and was named to the All-World Baseball Classic Team in 2013 and won a silver medal. In 2012 he signed a five year extension worth $75 million. 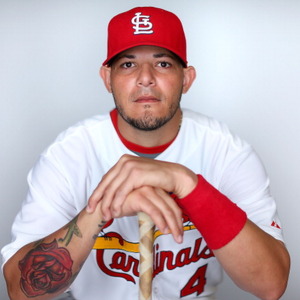