Willie McCovey net worth and salary: Willie McCovey was an American former professional baseball player who had a net worth of $3 million at the time of his death in 2018. Willie McCovey was born in Mobile, Alabama in January 1938. He was a first baseman who batted and threw left handed. McCovey made his Major League Baseball debut for the San Francisco Giants in 1959 and played there until 1973.

He played for the San Diego Padres from 1974 to 1976, the Oakland Athletics in 1976, and for the Giants again from 1977 to 1980. During his career McCovey was a six time All-Star selection. He was the National League Rookie of the Year in 1959 and the NL MVP in 1969. He was also named the MLB All-Star Game MVP in 1969. McCovey led the NL in home runs three times and led the NL in RBI twice. His #44 was retired by the San Francisco Giants and he was inducted into the Baseball Hall of Fame on the first ballot in 1986. He opened McCovey's Restaurant in 2003. In 1996 he was fined and given two years' probation for tax charges, but was given a pardon by President Barack Obama in 2017. Willie McCovey died on October 31, 2018 at the age of 80. 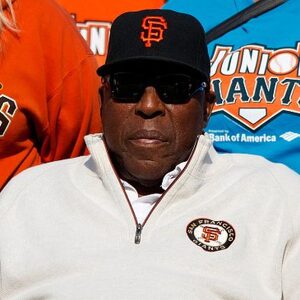