Willie Mays net worth: Willie Mays is a former American baseball player who has a net worth of $3 million dollars. Born in Westfield, Alabama, Willie Mays showed athletic promise in multiple sports, setting high school records in football and basketball, as well as excelling on the baseball field. While still in high school, he began playing for the Negro American League, first with the Chattanooga Choo-Choos, and then with the Birmingham Black Barons.

He was recruited by multiple Major League teams over the next few years, and ultimately signed with the New York Giants in 1951. After proving himself in minor league play, he was invited to play in his first Major League game in May of 1951. He went on to an incredibly distinguished sports career playing the majority of his career with the Giants, and then his final season with the New York Mets. He is a 24-time All-Star, a 12-time Gold Glove Award Winner, and he holds the record for the most outfield putouts in Major League history with 7,095. He retired in 1973. A book about his life entitled, "Willie Mays: The Life, The Legend", was published in 2010. 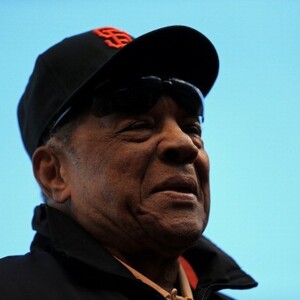