Wade Davis net worth: Wade Davis is an American professional baseball player who has a net worth of $5 million. Wade Davis was born in Lake Wales, Florida in September 1985. He is a pitcher who bats and throws right handed. Wade is the second-cousin of former MLB player Jody Davis. Wade was drafted #75 by the Tampa Bay Devil Rays in the 2004 Major League Baseball Draft.

He played in their minor league system before making his MLB debut for the Rays in 2009 where he played through the 2012 season. That year he was traded to the Kansas City Royals. He was the July 2010 American League Rookie Pitcher of the Month and was named a starting pitcher on Baseball America's 2010 All-Rookie Team. Davis finished 4th for AL Rookie of the Year in 2010. He was in the Royals starting rotation in 2013 but moved to the bullpen where he played in 2014. Through the 2014 season Davis has a record of 45 – 35 with 564 strikeouts and an ERA of 3.91. 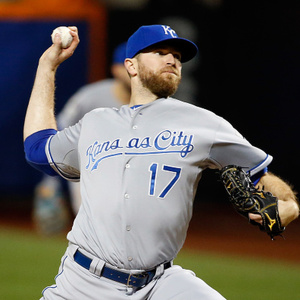