Wade Boggs Net Worth and salary: Wade Boggs is an American former professional baseball third baseman who has a net worth of $28 million. Wade Boggs was born June 5, 1958 in Omaha, Nebraska. Five-time American League batting champion Wade Boggs ranks with Tony Gwynn of the San Diego Padres as the greatest pure hitters of their generation ('80s through '90s).

In his 18-year career, Boggs racked up 3,010 hits for a career average of .328, accomplished in the pre-steroids, doctored-baseball era when baseball parks had more generous dimensions and were more pitcher-friendly. With 12 straight All-Star appearances, Boggs is third only to Brooks Robinson and George Brett in number of consecutive appearances as a third baseman. In 1999, he ranked number 95 on the Sporting News list of the 100 Greatest Baseball Players and was a nominee for the Major League Baseball All-Century Team. Boggs spent his 18-year baseball career primarily with the Boston Red Sox, but also played for the New York Yankees, with whom he won his only World Series, and Tampa Bay Devil Rays, with whom he recorded his 3,000th hit. He is 33rd on the list of career leaders for batting average among Major League Baseball players with a minimum of 1000 plate appearances. Boggs was elected to the Red Sox Hall of Fame in 2004 and the Baseball Hall of Fame in 2005. Boggs was a member of the 1986 American League Champion Boston Red Sox and the 1996 World's Championship New York Yankees team. He won a Gold Glove for fielding excellence with the Yankees and played in 12 consecutive major league All Star Games (1985-1986). In 2005, he was voted into the Hall of Fame in his first year of eligibility and was enshrined as a Red Sox player. 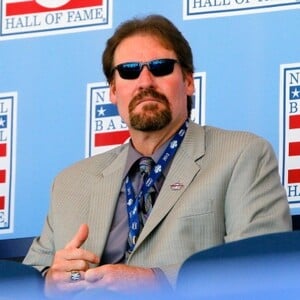