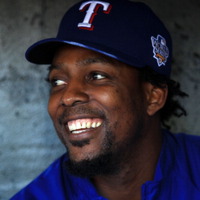 Vladimir Guerrero net worth and salary: Vladimir Guerrero is a former professional baseball player who spent 16 seasons in the MLB and has a net worth of $60 million. A nine-time All Star, Guerrero was widely recognized as one of the best all-around players. In 2004, he was voted the American League MVP. He also helped the Angels to five American League West championships, and was voted one of the most feared hitters in baseball. Know as the "bad ball hitter" he was also known for his ability to consistently hit balls thrown well outside of his strike zone.

Born on February 9, 1975 in Nizao, Dominican Republic he is one of nine children. Guerrero came from humble beginnings – he had no electricity, no running water, and shared two beds with six other family members (one of whom was older brother Wilton who was signed by the Dodgers in 1991). Vladimir Guerrero stands 6 feet 3 inches tall and bats without wearing batting gloves, a custom rarely seen in modern baseball. He attributes this to helping his grandfather pull cows home barehanded as a young boy. To improve his grip he coats his helmet with pine tar and rubs his helmet before going into the on-deck circle. Guerrero was signed by the Montreal Expos as an amateur free agent in 1993 and eventually made his major league debut in 1996. He was criticized during his first season in 1997 for being too aggressive at the plate and he led all major league outfielders in errors in 1997. In 1998, Guerrero's superior hand-eye coordination changed helped him to change things around in his career; although still aggressive at the plate he had consistently high batting averages year after year. He continued to improve through 2003 until a back injury shortened his season.

After his injury, Guerrero was a free agent for the first time in his career, but was courted by several teams and eventually signed a five-year, $70 million dollar deal with the Anaheim Angels. He helped the Angels to five first place finishes in six years with an average of 32 homers a year for the first five years until injuries limited him to all career lows in 2009 and he became a full-time designated hitter. In 2010, during his designated hitting year, he signed a one-year deal with the Rangers and helped them reach the 2010 World Series. After a less impressive season as a designated hitter with the Orioles in 2011, Guerrero was unable to find a major league deal he liked. He eventually signed with the Blue Jays but ultimately opted out of his contract within the season. He struggled a bit trying to re-enter the game, and due to family issues, and two operations on his right knee, Guerrero eventually announced his retirement in 2013.