Vince Coleman net worth: Vince Coleman is an American former professional baseball player who has a net worth of $12 million. Vince Coleman was born in Jacksonville, Florida in September 1961. He was a left fielder who threw right handed and was a switch hitter. Coleman set the all-time stolen base season record while playing at Florida A&M University.

He was also a kicker and punter on the football team. Coleman was drafted in the 10th round of the 1982 Major League Baseball Draft by the St. Louis Cardinals. He made his MLB debut for the Cardinals in 1985 and played there until 1990. Coleman then played for the New York Mets from 1991 to 1993, the Kansas City Royals from 1994 to 1995, the Seattle Mariners in 1995, the Cincinnati Reds in 1996, and the Detroit Tigers in 1997. He was named the National League Rookie of the Year in 1985 and was an MLB All-Star in 1988 and 1989. Coleman was a six time NL stolen base champion from 1985 to 1990. He holds other stolen base records including being sixth all-time with 752, the most in a season by a rookie with 110, being the last man to steal 100 bases in a season in 1987, leading the majors in stolen bases four times, and having 50 consecutive stolen bases without being caught stealing. In 2015 he became a base-running instructor for the Chicago White Sox. Coleman signed a four year deal for $11.95 million in 1990. 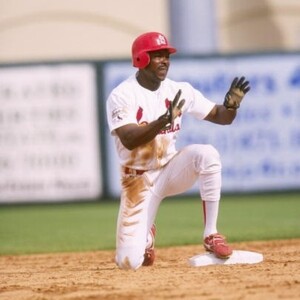