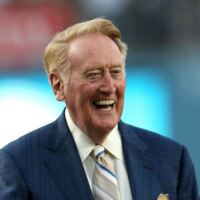 What was Vin Scully's Net Worth and Salary?

His 67-season tenure is the longest of any broadcaster with a single team in the history of professional sports. Beyond his play-by-plays for the Dodgers, Scully called numerous baseball, football, and golf events for CBS Sports, and was the lead baseball announcer on NBC Sports in the 80s.

Born in The Bronx, New York, Vin Scully attended Fordham University, where he began working as a broadcaster for college games. His college years were busy, as he co-founded a radio station, served as a broadcaster for multiple sports, sang with a quartet, edited his class yearbook, and played on the baseball team. He received only one job offer after college, but that led to a job broadcasting college football games for CBS Radio. He became part of the Brooklyn Dodgers coverage team in 1950, and remained with the Dodgers even after they moved to California. His play-by-play announcements were so popular, that fans would bring radios to the stadium to listen to his commentary, while watching the game live. He also continued to call football games, and occasionally tennis and golf, for CBS. In the early 80s, he shifted to covering baseball for NBC. He covered baseball for that network until the late 80s, when they cut their baseball coverage. Vin would go on to call baseball games for the Dodgers, including several World Series Games, for more than six decades. He retired at the end of the 2016 season.

Vin Scully was born on November 29, 1927 in the Bronx borough of New York City, and was raised in the Washington Heights neighborhood of Manhattan. His father, Vincent, was a silk salesman, while his mother, Bridget, was a homemaker. When he was four, his father passed away from pneumonia. Scully was subsequently raised by his mother, who remarried to an English merchant sailor named Allan. As a youth, Scully went to Fordham Preparatory School in the Bronx. He had his first job at the Pennsylvania Hotel in Manhattan, delivering beer and mail, cleaning silver, and pushing garment racks in the building's basement.

Following two years of service in the US Navy, Scully started his career as a student broadcaster and journalist at Fordham University. There, he co-founded the school's FM radio station WFUV, and became assistant sports editor for The Fordham Ram his senior year. Also at Fordham, Scully sang in a barbershop quartet, played center field on the Rams baseball team, and called radio broadcasts for the baseball, basketball, and football teams. After sending over 100 letters to stations along the East Coast looking for work, he received a response from the Washington, DC CBS Radio affiliate WTOP, which hired him to cover college football.

Scully landed his most famous and prolific job in 1950 when he joined Red Barber and Connie Desmond as an announcer for the Brooklyn Dodgers. He had a notable moment early on when he called the 1953 World Series, making him the youngest person ever to do so at the age of 25. When Barber left the Dodgers to work for the Yankees, Scully became the team's principal announcer. Among his colleagues throughout the 50s were André Baruch, Al Helfer, and Jerry Doggett. In 1958, Scully moved with the Dodgers to their new location in Los Angeles. He became well known in the City of Angels and throughout Southern California for his detailed play-by-plays, which audiences found necessary in order to follow the action in the cavernous Los Angeles Memorial Coliseum. By 1976, Scully had become so famous that Dodgers fans voted him the single "most memorable personality" in franchise history.

Over his 67-year tenure calling games for the Dodgers, Scully became renowned for his distinctive voice, descriptive style, and trademark introduction. He also departed with the common modern style of multiple sportscasters having on-air conversations during games, as he and his partners Doggett and Ross Porter would call each of their innings separately. Scully called his final regular season game from Dodger Stadium on September 25, 2016. He then called the Dodgers' season finale in San Francisco on October 2, before officially retiring at the age of 88. 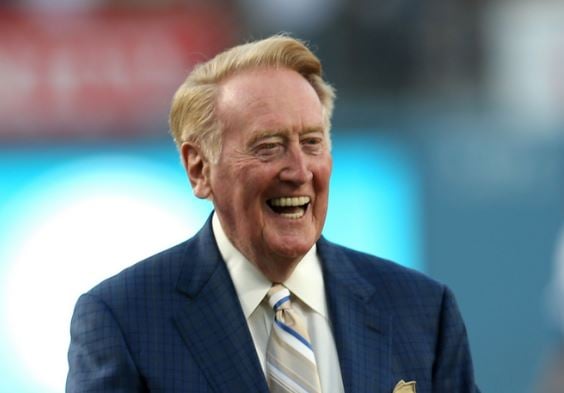 Beyond the Dodgers, Scully is well known for his baseball broadcasting on NBC from 1983 to 1989. During this period, he called Saturday games, three World Series, four NLCS, and four All-Star games. Along with partner Joe Garagiola, Scully called many of the most memorable moments in baseball history, including Fred Lynn's 1983 All-Star game grand slam; the New York Mets' rally in Game 6 of the 1986 World Series; the first official night game in Wrigley Field history in 1988; and Kirk Gibson's game-winning homer in Game 1 of the 1988 World Series. Scully called his final MLB game for NBC in 1989 at Game 5 of the NLCS. Following the season, the network lost its television rights to cover the MLB to CBS. In addition to baseball, Scully had been an announcer for PGA Tour golf coverage during his time at NBC.

After leaving NBC, Scully returned to his role as the national radio announcer for the World Series. He called games through 1997, with his final World Series game being Game 7 between the Florida Marlins and the Cleveland Indians. Additionally, Scully broadcast the annual golf Skins Game on ABC, as well as the Senior Skins Game.

Due to his popularity, Scully made appearances in numerous films, video games, and television series over his career. He narrated the short-lived NBC sitcom "Occasional Wife" in the 60s, hosted the NBC game show "It Takes Two" from 1969 to 1970, and hosted his own weekday talk variety program, "The Vin Scully Show," in 1973. He later lent his voice as the announcer in the Sony PlayStation MLB video game series. Among his film credits, Scully made cameo appearances in "For Love of the Game," "Bachelor in Paradise," and "Wake Me When It's Over." Meanwhile, his voice can be heard announcing baseball games in such films as "Zebra in the Kitchen," "The Party," and "The Bucket List."

Vin signed his first contract with the Brooklyn Dodgers on December 23, 1949. The contract paid $100 per week during baseball's roughly 30-week season. That came to $3,000 per season, which is the same as around $32,000 per year after after adjusting for inflation.

From 2008 onward, Vin Scully's salary was $3 million per year. At various points in his life he also had separate contracts with networks such as NBC and Fox.

In 1957, Scully wed Joan Crawford. In 1972, she died of an accidental medical overdose. Subsequently, Scully wed Sandra Hunt in 1973. Between his marriages, Scully had four children, two stepchildren, 16 grandchildren, and three great-grandchildren. His eldest son, Michael, was killed in a helicopter crash while working for a transportation company in 1994.

After 48 years of marriage, Scully's wife Sandra passed away in 2021 from ALS. Scully lived in Thousand Oaks, California, and regularly attended St. Jude the Apostle Church in Westlake Village.

In 2001 Vin paid $1.587 million for an 11,600 square-foot home in Hidden Hills, California. His gorgeous 2-acre property is located in an exclusive gated community called Ashley Ridge. It is considered Hidden Hills' most-coveted neighborhood.

To understand the value of Vince's home consider that Paul George bought the home right next door for $7.4 million in 2016. George listed his home for sale in 2020 for $9.5 million. George's property is 1.3-acres, whereas Scully's is 2-acres.

In October 2022 Vin's heirs listed the Hidden Hills estate for $15 million. Here is a video tour of the home: