Vicente Padilla net worth and salary: Vicente Padilla is a Nicaraguan professional baseball pitcher who has a net worth of $30 million. Currently, Padilla plays for the Fukuoka SoftBank Hawks but throughout his career he has played for the Arizona Diamondbacks, Philadelphia Phillies, Texas Rangers, Los Angeles Dodgers, and Boston Red Sox. Padilla has a wide variety of pitches: a fastball, a curveball, a sinker, a slider, a changeup, and an eephus pitch. The fastball is his main pitch: it tends to reach speeds of about 92-94 mph, but he is also one of the few pitchers in baseball to throw an eephus pitch, a slow curve that travels about 55 mph. Born on September 27, 1977 in Chinandega, Nicaragua, Vicente Padilla is roughly 6 feet tall and weighs 230 pounds. As of 2013, he has a salary of $3.25 million and plays for the Fukuoka SoftBank Hawks in Japan.

After working with former MLB pitcher Dennis Martínez to improve his change-up, Padilla was signed as an international free agent by the Arizona Diamondbacks in 1998. In 1999, Padilla made his Major League debut against the Cincinnati Reds, pitching in the ninth inning and giving up four hits and three runs without recording an out. In 2000, Padilla was traded from the Diamondbacks to the Philadelphia Phillies and moved to the starting rotation in 2002. He battled injuries in 2004 and 2005, posting a combined win-loss record of 16-19. After posting a 4.71 ERA and a 1.50 WHIP during the 2005 season he was traded to the Texas Rangers for Ricardo Rodríguez.

During the 2006 season with the Rangers, he came under fire for his now infamous "lack of control" on the mound. Padilla caused a controversy in Chicago when he hit White Sox catcher, A. J. Pierzynski, twice and later in the season caused a benches-clearing brawl against the Angels when he repeatedly threw at Angels batters, showing particular interest in slugger Vladimir Guerrero. In 2009, Padilla signed a minor league contract with the Los Angeles Dodgers and was activated to start playing later that year. In 2010, Padilla re-signed with the Dodgers a one-year, $5.025 million deal with a $1 million signing bonus. The Dodgers announced that Padilla would be their opening day starter but due to a number of recurring injuries, Padilla was only able to start 16 games for the team that year. He was put on the disabled list in 2011 and injuries prevented him from returning to the team that year. In 2012, Padilla signed a minor league deal with the Boston Red Sox that included an invitation to spring training. He earned $1.5 million when he was promoted to the major league level but was held up for a brief time with a scandal in Nicaragua for failing to pay child support. On January 16, 2013, Padilla signed a one-year deal with the Fukuoka SoftBank Hawks of the Nippon Professional Baseball League. 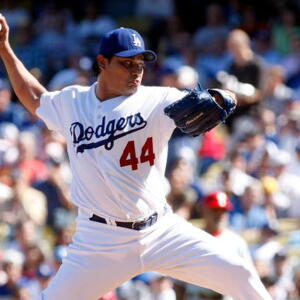