Trevor Cahill Net Worth: Trevor Cahill is an American professional baseball player who has a net worth of $23 million. Trevor Cahill was born in Oceanside, California, in 1988. He was drafted straight out of high school by the Oakland Athletics with the 66th overall pick during the 2006 MLB Draft.

Cahill played his pro debut three years later with the A's on April 7, 2009. The right-handed starting pitcher played with the Athletics until a 2011 trade sent him to the desert to join the Arizona Diamondbacks. Through the end of the 2014 season, Cahill has put together a 64-69 career win-loss record to go along with a 4.07 earned run average and 718 strikeouts. He has earned MLB All-Star honors once in his career in 2010. Cahill has competed internationally for the U.S. men's national baseball team and was part of the group that won the bronze medal at the 2008 Summer Olympics held in Beijing. He is known for his sinker pitch, which usually clocks in at about 88 to 92 miles per hour. Cahill's warm-up song is Jefferson Airplane's "White Rabbit". He is married to his wife, Jessica, and when he's not in Arizona with the Diamondbacks, the couple lives in his hometown of Oceanside. 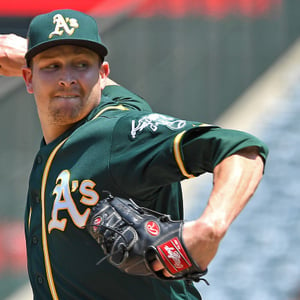