Trea Turner net worth and salary: Trea Turner is an American professional baseball player who has a net worth of $4 million. Trea Turner was born in Boynton Beach, Florida in June 1993. He is a shortstop who bats and throws right handed. He played for Park Vista Community High School and then NC State.

Turner was drafted by the San Diego Padres as #13 overall in the 2014 Major League Baseball draft. He got a $2.9 million signing bonus and was traded to the Washington Nationals in 2014. Trea Turner made his MLB debut for the Washington Nationals in August 2015. He won the World Series with the Nationals in 2019 and was the National League stolen base leader in 2018. Turner hit for the cycle in both 2017 and 2019. During his first five MLB seasons he had a batting average of .291 with 63 home runs, 216 runs batted in, and 159 stolen bases. 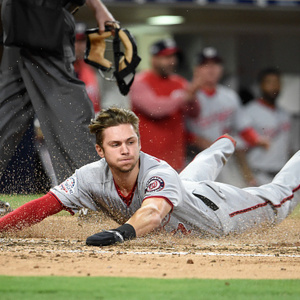