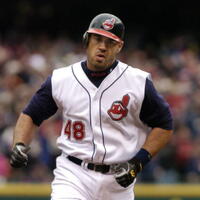 Travis Hafner Net Worth: Travis Hafner is a former American professional baseball player who has a net worth of $26 million. Born in Jamestown, North Dakota, in 1977, Travis Hafner played college baseball at Cowley County Community College in Kansas. The Texas Rangers drafted him during the 1996 MLB Draft in the 31st round. He made his professional debut on August 6, 2002 for the team that drafted him, but was traded later that year to the Cleveland Indians in exchange for Ryan Drese and Einar Diaz. Hafner went on to play for Cleveland for close to a decade until he spent one year with the New York Yankees during the 2013 season. Hafner, a designated hitter and first baseman, currently works at Notre Dame College as an assistant coach for the baseball team. He finished his pro playing career with a .273 batting average to go along with 213 home runs and 731 runs batted in. A local Cleveland candy shop, Malley's Chocolates, created a milk chocolate bar in his honor in 2006: the "Pronk Bar" was named in honor of Hafner's popular nickname. Hafner and his wife, Amy Beekman, have been married since the winter of 2006. They have two children together: sons Blake, born in 2009, and Trip, born in 2012.