How much is Tony Gwynn Worth?

Tony Gwynn net worth and salary: Tony Gwynn was a retired American baseball player who had a net worth of $20 million. Tony Gwynn was born on May 9, 1960 in Los Angeles, California. He grew up in Long Beach, California where he played baseball, basketball and football. He attended Long Beach Polytechnic High School and was then recruited by San Diego State University to play basketball. Tony opted not to play baseball at all during his freshman year, but eventually a high school friend convinced him and the team's coach to give it a swing. Tony soon became a two-sport all star at SDSU. He set school records that still stand today in both sports. He was selected in the third round of the 1981 draft by the San Diego Padres. He would go on to become one of the most highly respected and talented players in the MLB. During a professional career that spanned fro 1982 to 2001, Tony played every season with the Padres. His career batting average was .331. He had 3141 career hits, 135 home runs and 1138 RBIs. Tony was a 15 time MLB All-Star, 5 time Gold Glove winner, 7 time Silver Slugger and an 8 time NL batting champion. His jersey number was retired by the Padres in 2004. Tragically, Tony Gwynn died on June 16, 2014 at the age of 54. He had been battling cancer of the salivary gland. 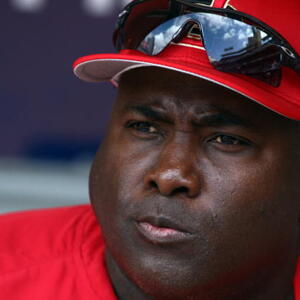