Tom Seaver Net Worth: Tom Seaver was a retired Major League Baseball player who had a net worth of $10 million. He was best known for his time with the New York Mets, helping them turn from lovable losers into formidable foes, winning the World Series in 1969 on a team that would be later called the "Miracle Mets". During his career he earned around $6.6 million in total MLB salary. That's the same as around $16 million in today's dollars. He earned his highest single-season salary in his second-to-last season, earning $1.136 million from the Chicago White Sox.

He was born George Thomas Seaver on November 17, 1944 in Fresno, California. He spent six months in the Marine Corps Reserve before enrolling at Fresno City College. He was then recruited to the University of Southern California. He was drafted by the LA Dodgers in 1965 but after asking for a $70,000 contract the team declined. He finally signed his first professional contract a year later, this time with the Atlanta Braves. Unfortunately, a complication caused this contract to be voided after it was alleged he was ineligible. Ironically, because he had turned pro he could not return to college. He eventually signed a contract with the Mets in 1967.

Seaver would go on to play for the Mets from 1967 to 1977, winning the World Series in 1969. He played a total of 13 seasons in the MLB, playing for the Cincinnati Reds, Chicago White Sox and Boston Red Sox. Since baseball is often said to be a game of numbers, Seaver's record includes 311 wins, 3,640 strikeouts, 61 shutouts and a 2.86 earned run average. This makes him one of the best starting pitchers in the history of baseball. In his two decade-long career, Tom Seaver won the National League Rookie of the Year Award in 1967, and three NL Cy Young Awards as the league's best pitcher.

When he was inducted into the Hall of Fame in 1992, he received the highest percentage ever recorded (98.84%) up to that point. He has the only plaque at Cooperstown wearing a New York Mets hat. Being the Mets' all-time leader in wins, Seaver, along with Gil Hodges, is the only Met player to have their jersey numbers retired by the team.

Personal Life: In 1966 Tom married Nancy Lynn McIntyre. They had two daughters together and lived on a 115-acre vineyard in Calistoga, California which they called Seaver Family Vineyards.

Unfortunately Tom began suffering from memory loss in 2013 that was later diagnosed as dementia. He largely retired from public life from that point on. He died on August 31, 2020 at the age of 75. 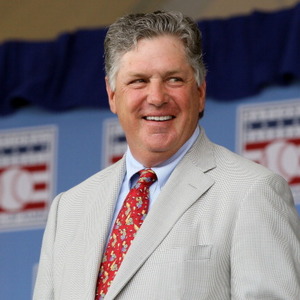