Tom Glavine net worth: Tom Glavine is an American retired professional baseball player who has a net worth of $80 million. Tom Glavine has earned his net worth through his years of playing baseball for teams like the Atlanta Braves and the New York Mets. Thomas Michael Glavine was born in Concord, Massachusetts in March 1966.

In high school he lettered in both baseball and ice hockey. He was later elected to the Billerica Memorial High School Athletic Hall of Fame. He did not attend college but was drafted by the Atlanta Braves in the 1984 draft. He was also drafted in the 1984 NHL Draft by the Los Angeles Kings. Glavine decided to play baseball and made his debut in August 1987. He won 164 games as a pitcher during the 90s. In five seasons he won 20 plus games and was awarded the Cy Young Award twice. He is a member of the 300 win club, just one of 24 pitches to be in that group. In 1995 he won a World Series championship with the Braves and was voted World Series MVP. He has also won four Silver Slugger awards. Glavine played for the New York Mets from 2003 to 2007 before returning to the Braves from 2007 to 2010. His #47 jersey was retired by the Braves in 2010. In his first year of eligibility he was voted to the Baseball Hall of Fame in 2014. He started working as a color commentator for the Atlanta Braves in 2011. He and his wife Christine have five children and Tom coaches for his son's hockey and baseball teams. 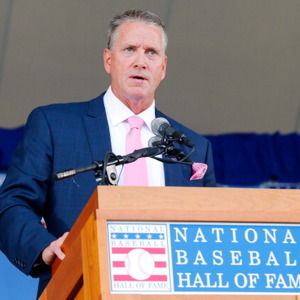