How much is Todd Stottlemyre Worth?

Todd Stottlemyre Net Worth: Todd Stottlemyre is an American retired professional baseball player who has a net worth of $24 million. Todd Stottlemyre was born in Yakima, Washington in May 1965. He was a starting pitcher who batted left and threw right handed. Stottlemyre pitched for the University of Nevada Las Vegas. He was drafted #3 by the Toronto Blue Jays in the 1985 Major League Baseball Draft and made his MLB debut for the Blue Jays in 1988 where he played through 1994. He next pitched for the Oakland Athletics in 1995 and for the St. Louis Cardinals from 1996 to 1998. Stottlemyre played for the Texas Rangers in 1998 and finished his career playing for the Arizona Diamondbacks from 1999 to 2000 and then again in 2002. During his MLB career Stottlemyre won back to back World Series Championships with the Toronto Blue Jays in 1992 and 1993. He finished his career with a record of 138 – 121 with 1,587 strikeouts and an ERA of 4.28. He became a stock market analyst for Merrill Lynch and founded a hedge fund. 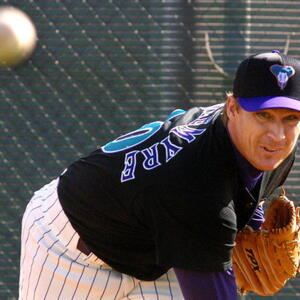