Todd Helton net worth and salary: Todd Helton is a former American professional baseball player who has a net worth of $65 million. Todd Helton is probably most famous for playing first base for the Colorado Rockies. He holds the following club records for hits (2,356), home runs (347), doubles (553), walks (1,252), runs scored (1,327), RBIs (1,305), on-base percentage (.422), games played (2,043), total bases (4,020) and other categories. He has spent his entire career with the same team, making him the fifth-most active MLB player, who spent their entire career with one team, he joins Chipper Jones, Derek Jeter, Jorge Posada and Mariano Riveria. Todd was born in Knoxville, Tennessee on August 20, 1973. He was a letterman in football and baseball during high school at Central High in Knoxville. In his senior year he received All-American honors from Baseball America. Helton is married to Christy. They have two daughters, Tierney Faith and Gentry Grace. On the Rockies team he wears number 17 as a tribute to former Chicago Cubs first baseman Mark Grace.

Todd Helton Salary
Todd Helton's salary is $14 million per year, which is part of an 11 year $150 million contract.

Among Helton many accomplishments and awards are the Dick Howser Trophy, the National League Hank Aaron Award, National League First Baseman Silver Slugger Award, and Gold Glove Award. For much of the 2010 season he was on the disabled list due to a degenerative back condition, he returned in August 2010, and says he would like to play another three years for the Rockies before retiring. After his return his stats included: hit .256, with 8 HR, and 37 RBI for the season. He played his 2000th game on June 30 of 2011, however it was a 6-4 loss for the Rockies against the Chicago White Sox in a 10 inning game. Helton is one of only 5 players in MLB history to have at least 500 doubles, 320 home runs and a .325 batting average for a career, he joins Babe Ruth, Stan Musial, Lou Gehrig, and Ted Williams. 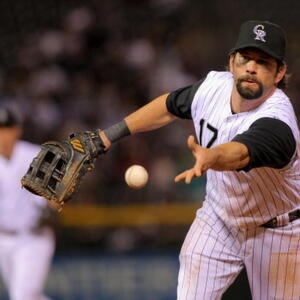