Tino Martinez Net Worth and Salary: Tino Martinez is an American former professional baseball player who has a net worth of $20 million. Tino is best remembered as one of the main cogs in the New York Yankees 1990s dynasty. During his 16-year MLB career, Tino Martinez scored 1,008 runs, drove in 1,271 runs, and hit 339 home runs. He earned $52 million in salary.

He was born Constantino Martinez on December 7, 1967, in Tampa, Florida. Serving as a third baseman and first baseman, Martinez was selected in the first round of the 1990 draft by the Seattle Mariners. After several not so shiny seasons, Tino broke out in 1995 when he drove in 111 runs, hit 31 home runs and batted .293 for the division-winning Mariners. The next season, he was traded to the Yankees, where he served as Don Mattingly's replacement at first base. He soon became one of the most popular players in Yankee's history, forever acknowledged for two epochal World Series home runs. As for his best season with the team, it was in 1997 when he hit 44 home runs, drove in 144 runs and placed second in the Most Valuable Player voting. After the end of the 2001 season, the St. Louis Cardinals signed Martinez as a free agent, replacing a legendary first baseman Mark McGwire. In 2003, he played for his hometown Tampa Bay Devil Rays and then got back to the Yankees for one more season in 2005. Following the season, Martinez retired from the sport and started working as an analyst for ESPN. Also, he served as a hitting coach for the Miami Marlins in 2013. 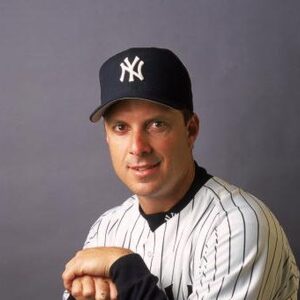