Tim Salmon Net Worth: Tim Salmon is a retired American professional baseball player who has a net worth of $35 million. Tim Salmon was born in 1968 in Long Beach, California. He was drafted during the 1989 Draft after playing at Grand Canyon University. Salmon made his professional debut on August 21, 1992 as a member of the California Angels.

He played with the organization through several name changes between 1992 and the end of this career in 2006, but he did not join any other franchise. Salmon, who goes by the fan-given nickname King Fish, is considered to be one of the best in the team's history. The right-handed batter and thrower played right field and designated hitter with the team. He was part of the 2002 World Series Championship team. In 1993, Salmon earned American League Rookie of the Year honors. Two years later, he was given the Silver Slugger Award. In 2002, Salmon won the American League Comeback Player of the Year Award. He finished his pro career with a .282 batting average, 299 home runs, and 1,016 runs batted in. At the time of his retirement, Salmon led the organization is all-time home runs, runs scored, walks, and slugging percentage. Salmon, his wife, and their four children live in Scottsdale, Arizona. He is the creator of the Tim Salmon Foundation, which was started to help children in need of assistance. 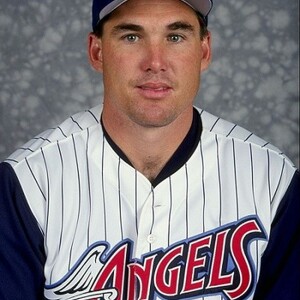