Tim Raines net worth: Tim Raines is a former American professional Baseball player who has a net worth of $12 million. Tim Raines, also known as "Rock" was born on September 16, 1959 in Sanford Florida. He started his playing career at Seminole High School where he stood out as baseball player. In his playing days, he played as a left fielder in Major League Baseball.

First noticed on the scene when selected by Montreal Expos In the fifth round of the 1977 MLB draft, he played six games as pinch runner in 1979 and was switched to playing the outfield. He's most prominent for his achievements in the 13 seasons he spent in Major League Baseball from 1979 to 2002 and is regarded as one of the best leadoff hitters and base runners in baseball history. He has an amazing record of 2,502 games, 1,571 runs scored, 2,605 hits, 430 doubles, 113 triples, 170 home runs, 980 runs batted in, 1,330 walks and a .294 career batting average to go with his 808 stolen bases amongst other records placed him 5th on the list of all-time best. In his twenty three years he played for Montreal Expos, Chicago White Sox, New York Yankees, Oakland Athletics, Baltimore Orioles and the Florida Marlins. Since his retirement he has coached The Chicago White Sox and coached for the Toronto Blue Jays. He married his sweetheart Virginia Hilton in 1979 the same year their first child Tim Raines Jr. was born. No doubt the 5th all-time best baseball hero had a great career. In 2017 Raines was inducted into the National Baseball Hall of Fame on his 10th ballot. 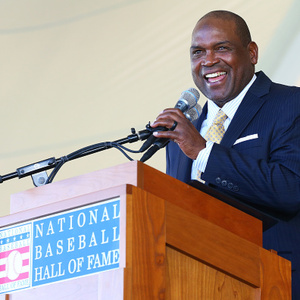