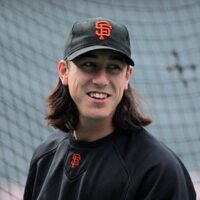 Tim Lincecum Net Worth: Tim Lincecum is a Filipino-American baseball pitcher who has a net worth of $40 million dollars. Tim Lincecum was born June 15, 1984 in Bellevue, Washington. Nicknamed The Freak and Big Time Timmy Jim, Lincecum is a pitcher for the professional baseball team the San Francisco Giants of the MLB (Major League Baseball). His major professional accomplishments include winning the NL Cy Young Award in 2008 and 2009, appearing in four All-Star Games, from 2008 through 2011, being a member of the 2010 and 2012 World Series champions, winning the Babe Ruth Award in 2010 as the most valuable player of the MLB postseason, leading the National League in strikeouts three times, from 2008 through 2010, pitching the first no-hitter at Petco Park against the San Diego Padres in 2013 and his repeated feat against the Padres in 2014, this time at AT&T Park. As a kid, Tim would tag along with brother Sean and his dad during their pitching sessions and mimic everything he saw. As it turned out, Tim had the perfect body type to duplicate dad Chris's unique windup, a series of torso turns and arm whipping action punctuated by a long stride toward the plate. In recent years, coaches, writers and broadcasters have speculated that Chris Lincecum developed his signature pitching motion by studying Sandy Koufax. Chris says the delivery was completely his own creation. Over the years, father Chris videotaped Tim's games and the two analyzed them together. Chris developed a series of hand signals for Tim and during games he would flash them to his son, letting him know when he was making mistakes in his mechanics. Tim soon attracted the attention of college coaches in the area. Ken Knutson, the head baseball man at the University of Washington, came for a visit and was convinced of Lincecum's ability. Tim was sensational in his first year with Washington, becoming the first player ever to be named Pac-10 Freshman of the Year and Pac-10 Pitcher of the Year. After turning down an offer from the Cleveland Browns, he traveled to the East Coast to pitch for the Harwich Mariners in the Cape Cod League and landed on several other teams before making his home with the San Francisco Giants in 2007.