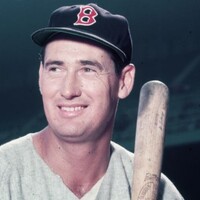 Ted Williams Net Worth: Ted Williams was an American professional baseball player and manager who had a net worth of $5 million. Ted Williams was born in San Diego, California in August 1918. His entire 19 year Major League Baseball playing career was spent as left fielder for the Boston Red Sox. Williams was nicknamed "Teddy Ballgame", "The Kid", "The Thumper", "The Splendid Splinter", and "The Greatest Hitter Who Ever Lived". Williams was a two time American League Most Valuable Player in addition to being a six time batting champion, two time Triple Crown winner, and 17 time All-Star. He was inducted into the Baseball Hall of Fame in 1966. He is the last MLB player who batted over .400 in a season (1941). He interrupted his career to serve in the US Navy and Marine Corps for World War II. He later served in the Korean War and missed part of two seasons. After retiring Williams managed the Washington Senators / Texas Rangers. He hosted a television program about fishing and was inducted into the IGFA Fishing Hall of Fame. He helped raise millions of dollars in proceeds for cancer care and research and was presented the Presidential Medal of Freedom in 1991. Williams was named to the Major League Baseball All-Time Team in 1997. Ted Williams passed away on July 5, 2002 at 83 years old of cardiac arrest. His son and daughter chose to have his remains frozen cryonically.