Ted Lilly Net Worth: Ted Lilly is a former American professional baseball player who has a net worth of $40 million. Born in 1976 in Lomita, California, Ted Lilly played at Fresno City College. The Los Angeles Dodgers drafted him during the 23rd round of the 1996 MLB Draft. He worked his way through the team's minor leagues before being traded to the Montreal Expos. Lilly made his pro debut with the Expos on May 14, 1999 against the Pittsburgh Pirates, coming on as a relief pitcher. He was traded to the New York Yankees the following season before playing for the Oakland Athletics, Toronto Blue Jays, Chicago Cubs, and Los Angeles Dodgers. He was named an MLB All-Star twice during his career in 2004 and later in 2009. Lilly last pitched for the team that originally drafted him on June 4, 2014. He finished his career with a 130-113 win-loss record, a 4.14 earned run average, and 1,681 strikeouts. During the spring of 2014, the Chicago Cubs hired him as an assistant. Lilly is married to his wife, Natasha, who works at a veterinarian. The couple is active in animal rescue and advocacy. They have one child together, a son named Theodore Roosevelt Lilly IV, who was born in 2010. 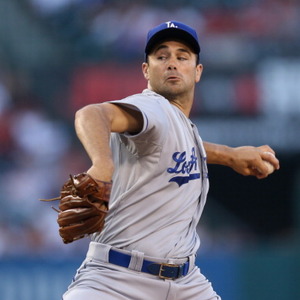